LIVING deep in the Dorset farming community provided an opportunity to present Land Rover’s radical new Defender to those most used to putting such vehicles through their paces.

Round here, the short-wheel-base Defender has been the weapon of choice for most farm workers to haul everything from live to animals to what they eat ….. and what they eject!

By any measure, not the most pleasant conveyance to be in – but these are workhorses. Is the new model fit for purpose?

To be so, it has to have the ability to go anywhere, do anything and carry everything while not being too bothered about being battered and bruised along the way. The old Defender, was never the prettiest and actually looked all the better for odd dent and scratch. 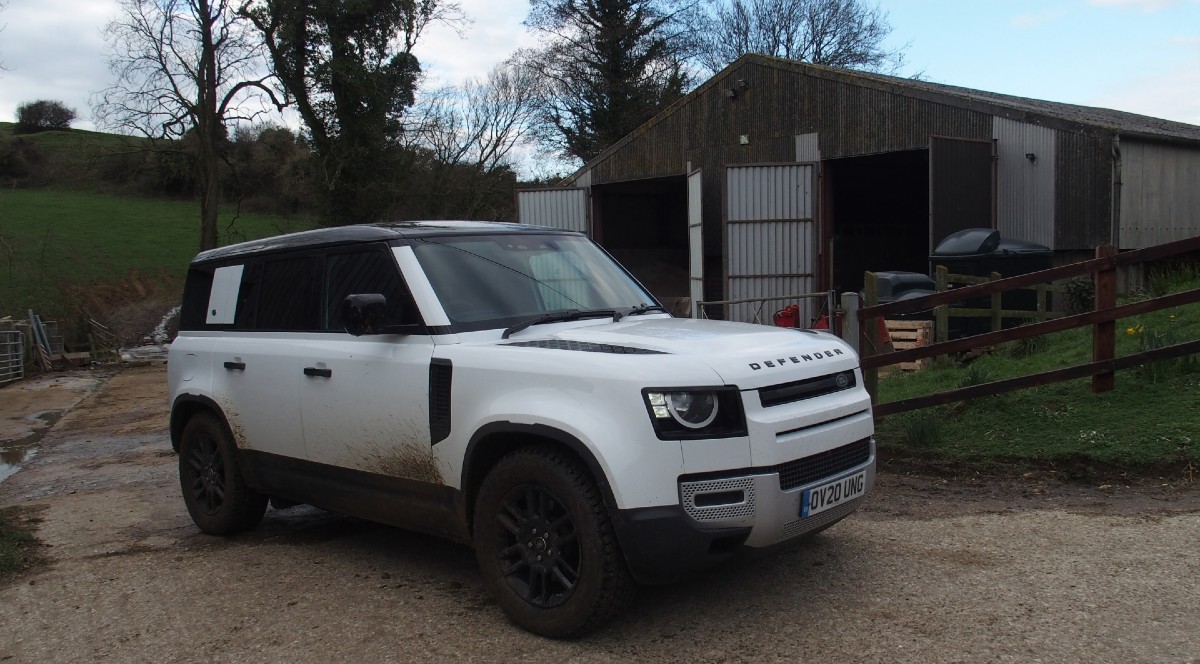 This really gave the designers and engineers at Land Rover a problem: the newcomer needed to be just as capable, but with more on-road desirability. Less of a tool, more of a lifestyle choice? Too smart and will it have abandoned traditional customers such as the farmers, rescue services, utilities and adventurers.

The new Defender 110 D240 S was perhaps not the ideal version which with to introduce my farmer chums to: White is definitely not ideal down on the farm while seven seats, smart upholstery and various bells and whistles raised some eyebrows.

“I could use it to go out in the evenings but I can’t imagine hauling what we put into the back of our Landies,” said farmer Jane.

“Its too posh,” added farmer Rob. “It’s more like a Discovery or a Range Rover.”

They had a point and £52,000 is probably a bit too much when all you are doing is throwing sheep or bales of straw into the back. 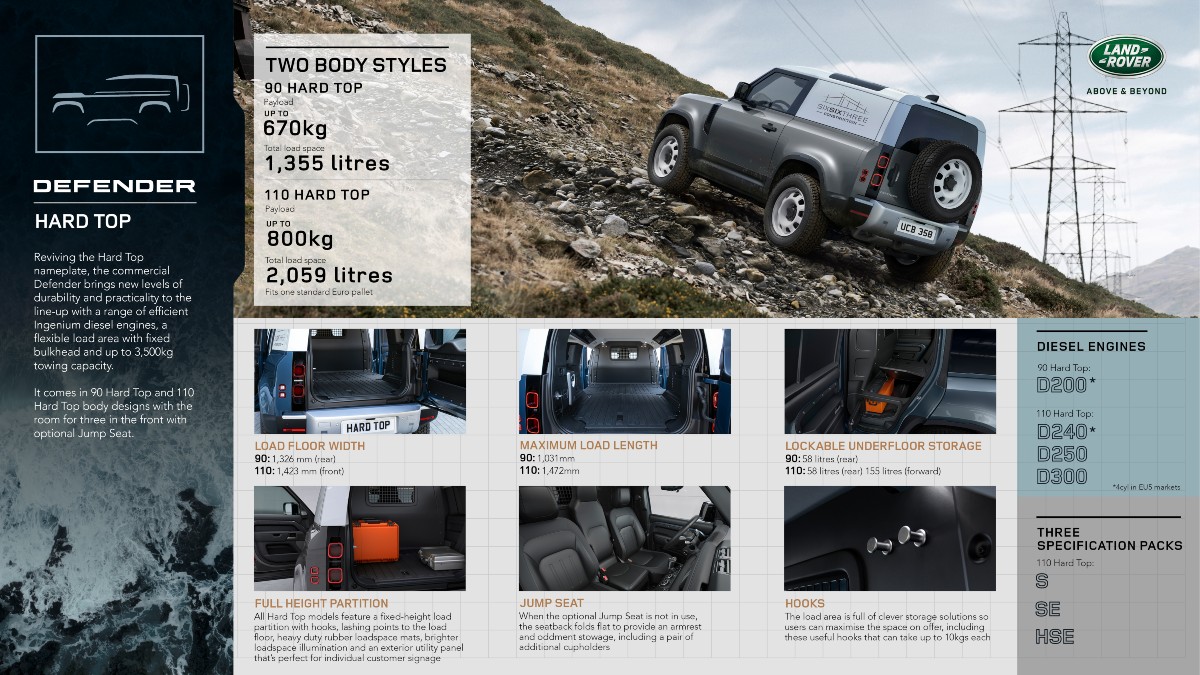 The three-door Hard Top 90 has a total load capacity of 1355 litres, while the 110 can carry 2059 litres. The load area is separated from the passenger compartment by a full-height partition, with underfloor stowage designed to maximise cargo space – having seen what drips out the back of many of the farm Land Rovers, underfloor stowage? –  not so good.

The commercial Defender is also able to tow up to 3500kg, and can be fitted with an optional third central jump seat.

Back to our test vehicle, the first thing that strikes you is that it’s big. Exterior design invokes the old Landies but is very modern. The boxy styling allows maximum interior space, while looking out you can see where the bodywork ends and short overhangs are good for off-road – the shorter wheelbase should be even better.

The Defender 110 has air suspension as standard, which aids off-road ground clearance and wading ability and the suspension feels very refined. It doesn’t actually feel hardcore like the vehicle it replaces. On the road it feels like an upmarket SUV, quiet smooth with a distinct lack of rock, rattle and roll. 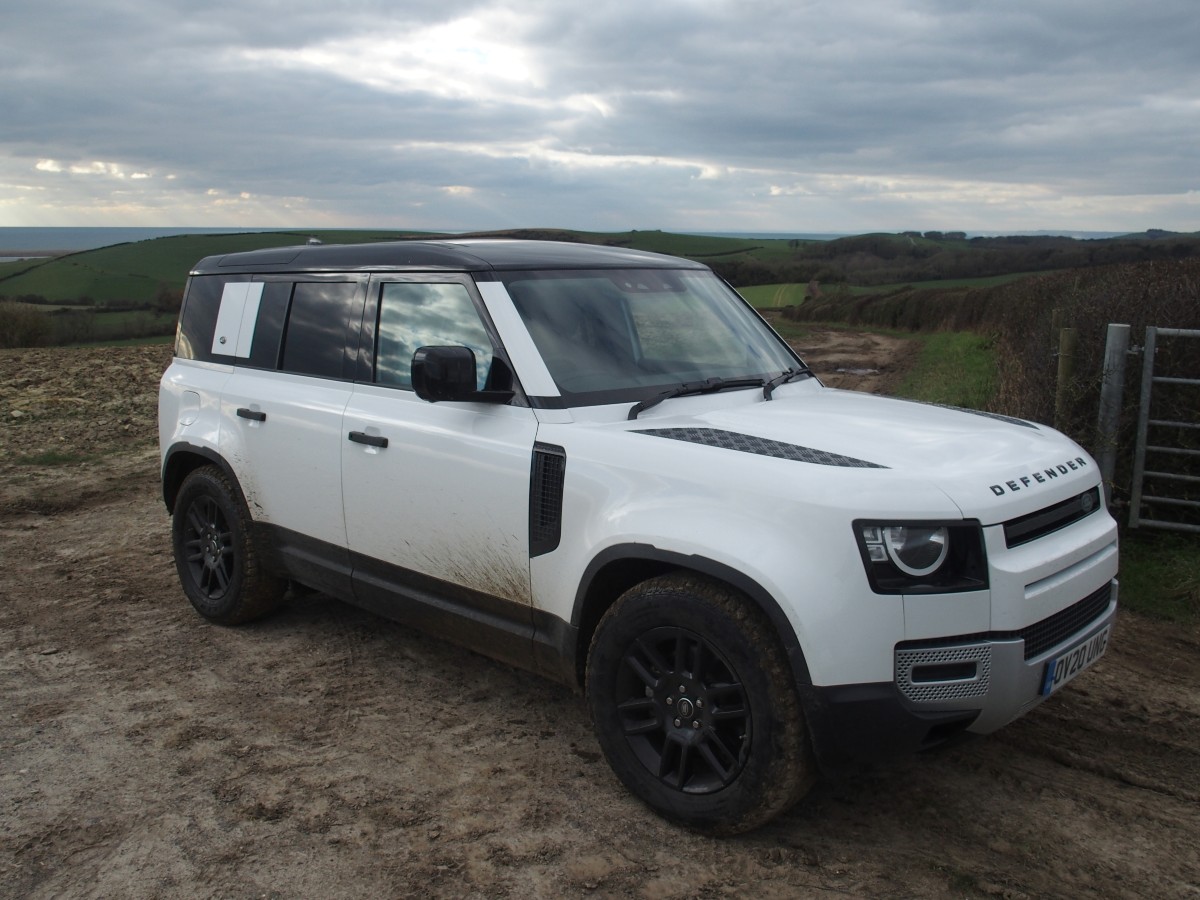 The D240 diesel engine is a good choice, enough grunt to be useful without being too thirsty. There is a lot of weight to pull, however, so don’t expect too much in the way of mpg – anything between 25 and 35mpg depending on what you are doing.

The eight-speed auto is smooth enough and acceleration surprisingly good until the boxy aerodynamics kick in. A really nice motorway cruiser and not uncomfortable off road either.

Which brings us neatly to off road performance. An advantage of being in farming country, and getting on with the neighbours, is that there are plenty of fields and hills to play with, many of them already nicely churned up by tractors and other forms for farm machinery.

The new Defender was unfazed by any of this and handled the deepest ruts easily in low range although it was equipped with an Off-Road Capability Pack: All Terrain Progress Control (ATPC) ,Terrain Response 2, Configurable Terrain Response at an additional cost of £870. 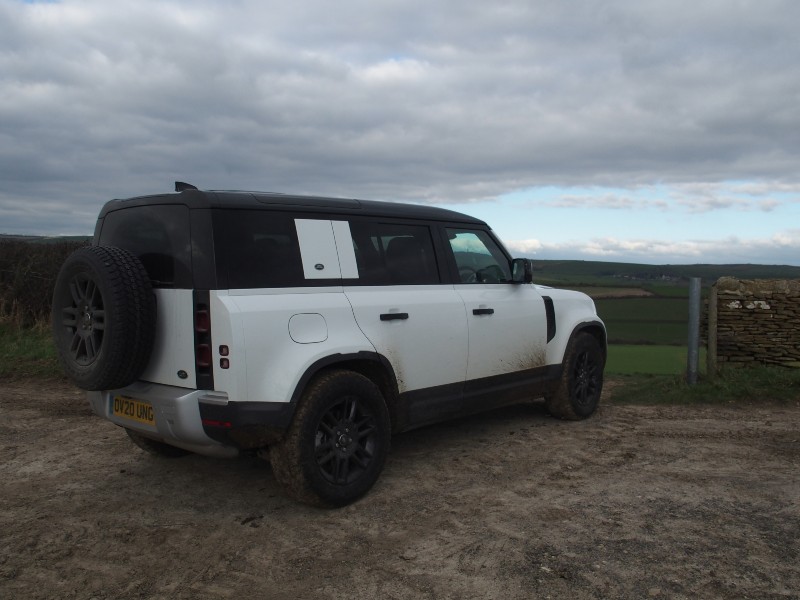 This kind of begs the question – shouldn’t a Land Rover have all this capability built in?

But then, in terms of chassis articulation, traction, wading, mud, uphill, downhill, soft ground or icy surfaces the Defender does not disappoint. You are also helped out by all sorts of driver aids in terms of sensors and cameras.

Switching between high and low ratio, diff lock etc, is all done electronically as are the controls for launch and traction control systems, hill decent, slow-speed throttle control and underbody cameras.

Inside, the Defender is gloriously roomy, the 110 has the option of third row child seats and a folding jump seat in the front row. There is a also a huge number of useful storage spaces. 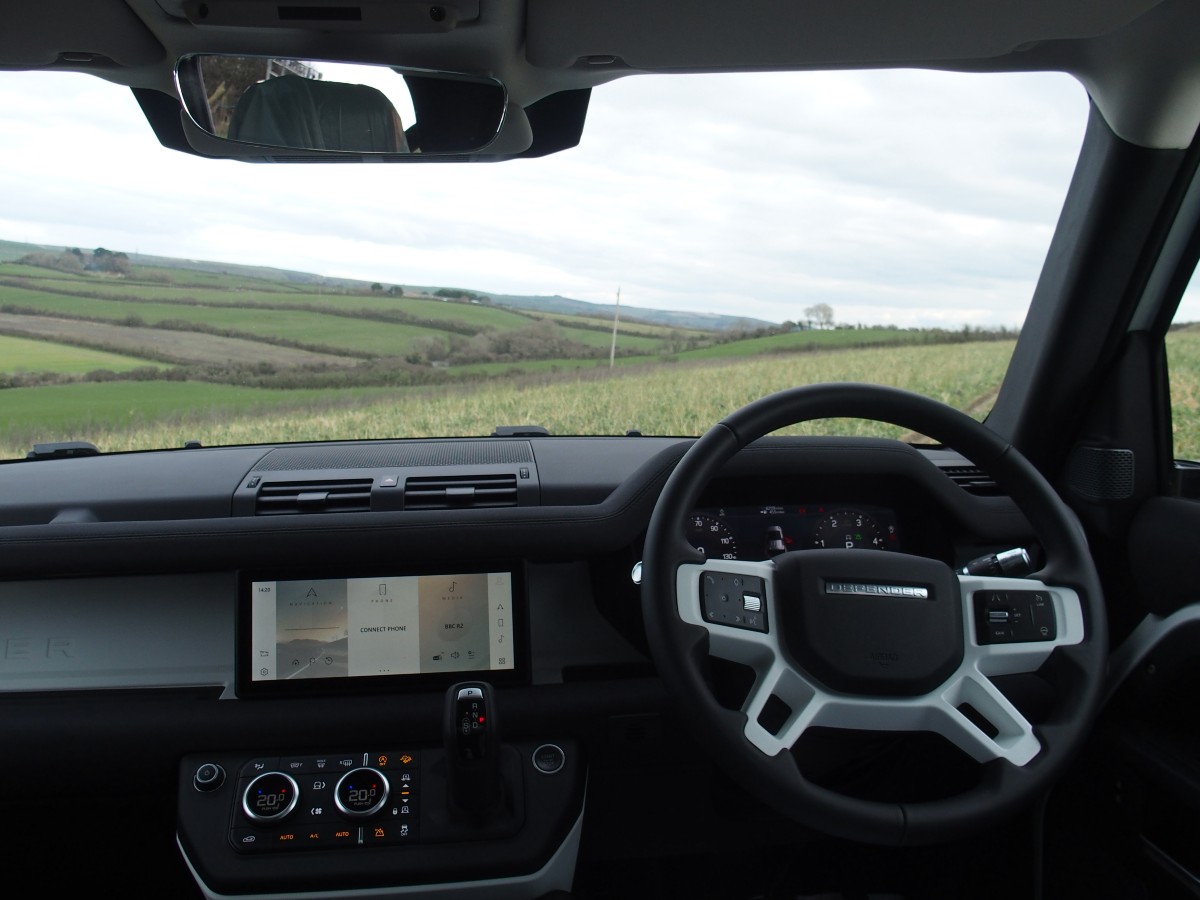 Infotainment electronics, HUD and driver aids are bang up to date with modern premium-car standards.

But then, the brand already has premium in the form of Range Rover and Discovery. Does it risk losing the hard-core element among Land Rover buyers? Time will tell.